I was trying to think of ways I could write this post without wanting to scream or slap the stupid out of mindless people travelling the world and ruining it in the process.

What has become of us? We will do anything to get “the shot.”

Risk our own safety, check!

Have absolutely no care about how our actions affect the world around us! Check!

We should be ashamed!

And we should be held accountable. But sadly we are not.

If you think I am exaggerating take a look at this, it’s an actual page dedicated to people who have died taking a selfie.

Google “selfie death” and see what comes up! It’s astounding!

It’s so bad that the government of India has decided to ban selfie clicks in most of the major tourist destinations in the country to curb the rising incidences of self-death.

I want to say who cares if they get hurt or die, it serves them right!

But it’s actually so tragic to lose a young life like this and so unnecessary too.

The other MAJOR problem with this behaviour is that it can lead to long-term consequences for the location itself.

Every time a photo of an exotic, stunning location is geo-tagged it brings more people to the location and it seems people are always trying to one-up each other when they get there.

Last year, Keyhole Falls Hot Springs (in northwest of Pemberton Meadows, BC) was closed thanks to too many campers being irresponsible with food and garbage, which led to “dangerous” behaviour from bears.

Government recreation officer Alistair McCrone said there are at least four food-habituated bears near the springs, plus a few cubs, adding:

“This is the most dangerous situation I’ve ever seen. We have a large number of aggressive and dangerous bears in a very confined space … They are charging people and chasing them until people drop their food and their backpacks, and then they’re eating food out of the backpacks. The next stage in the progression here, in terms of bear aggression, is an attack on people.”

If people don’t obey the closure, McCrone said the consequences could be deadly.

“Say you didn’t drop your food. The bear’s going to keep coming, smack you around and take your food. You may not survive that. If people get attacked in the area, we’re going be forced to shoot the bears — and we’re not going to be able to tell which bear to shoot, so we’ll have to shoot them all. Cubs won’t have a mother and that’s up to nine bears dead”

The Instagram captions above show just how close people are getting.

According to Danter, visitor numbers in Skye increased by 13-14% between 2014-17, but the number of visitors going to the Fairy Pools – one of the island’s iconic spots – did so by 54%. “For the people living in these locations, life in the past two years has become challenging,” he says, pointing to a frustrating problem with tourist behaviour, in which visitors want to tick off “must-see” spots. “In the corresponding period, other scenic locations actually saw a drop in numbers.”

At Bogle Seeds Farm in Flamborough, Ontario all hell broke out last month when selfie-seekers swarmed the farm, trampling thousands of sunflowers and leaving garbage behind.

“People started coming in from every direction in the farm and just thousands of people walking past our ticket booth”, said Barry Bogle.

Traffic was so bad in the area that Hamilton police and OPP were monitoring traffic and assisting with parking concerns.

“Police arrived and thank goodness they kind of helped out and put the massive traffic jam under control a little bit,” said Bogle.

At around 2 p.m. the Bogles decided to shut things down.

“We decided that we just could not do this again for safety sake on the road and safety on the farm here. We had way too many people on our farm,” Barry said.

“Everything went wrong. People were coming in, trespassing, knocking down our plants, stealing the heads. It was just chaos.”

Today he says some of the crops are now ruined, but people keep showing up, telling the Globe and Mail the influx of selfie seekers was like “the zombie apocalypse.”

If you think that’s bad, read on dear reader!

This baby dolphin died after being passed from tourist to tourist for a selfie.

The same thing happened to this peacock recently.

Take a look at this article too, it highlights some pretty upsetting incidences where animals have died thanks to selfie seekers. How sad!

I could add about a hundred more incidents like this. It’s so tragic!

While not all wildlife tourism is harmful, there are examples all over the world of animals being used for profit in ways that inflict suffering on them or endanger them.

“One of the biggest culprits is the growing popularity of wildlife selfies where tourists, with the help of tour operators, capture and share images of themselves with wild animals — exploiting them as photo props,” WAP says. 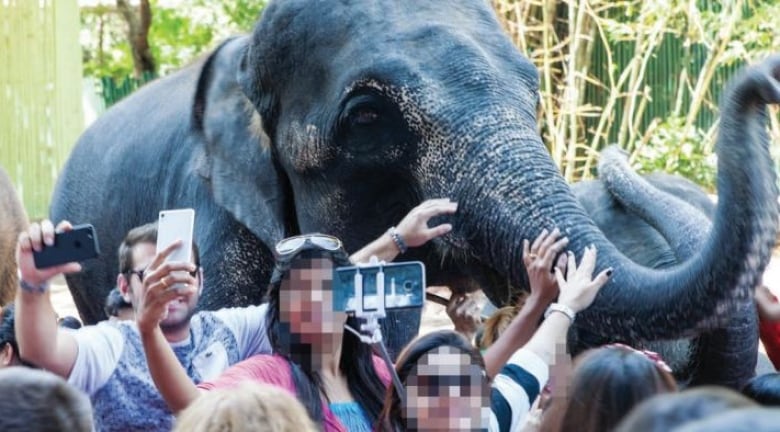 Elephants are one of the most selfie’d animals, second only to kangaroos, according to research by the Toronto-based marketing firm Grassriots. (World Animal Protection)

On December 5, 2017, Instagram announced a new alert system to let users know the wildlife photos they’re searching for may have contributed to harming animals.

When any of the site’s 800 million users search or click on certain hashtags, like #slothselfie, they will get a pop-up message reading, in part, “Animal abuse and the sale of endangered animals or their parts are not allowed on Instagram.”

Users will be able to click through to a dedicated page to learn more.

“We are encouraged by this first step towards changing the acceptability of using animals for our entertainment,” Cassandra Koenen, of World Animal Protection, said in a statement. The organization said it contributed 94 suggested hashtags to Instagram.

I’ve written about this type of animal abuse before on The Hub.

If you want to know what you can do, read this article: What Is Ethical Tourism?

Now in addition to all I’ve noted above, there is more!

The GARBAGE created in popular travel destinations is astounding!

Many places around the world are drowning in plastic waste.

I’ve seen this all first hand in Mexico and Costa Rica, I will never go back!

In Bali, From December to March, thousands of tonnes of plastic debris are washed onto the island’s main tourist strip, polluting the sand and the ecosystems.

Last year two B.C. photographers stumbled upon the ugly side of Joffre Lakes Provincial Park showing us on Facebook how much garbage they collected.

The problem with garbage is a big one, I could not find any information on waste management in the tourism industry. The majority of those I could find mainly discussed strategies and recommendations, but in most cases lacked the data showing the effects of carrying them out.

The waste generated by hotels, motels, restaurants, coffee shops etc. offering and serving up more single-use plastic packing for tourists is where it all starts.

Think of how much single-use small plastic shampoo, body wash, and conditioner bottles. Soap wrapped in plastic. Plastic cups, straws, and bottles. Single-use plastic wrapped food items like jams, honey, sugar etc. Now multiply that by all the places to stay in the world. Astounding right?!

Studies have shown that when we travel we tend to waste way more water, electricity, and resources compared to when we are at home.

I get this. When we are on holiday we feel entitled to do what we want because we paid (sometimes big bucks) for the trip. But why does that need to come at the expense of the planet and its inhabitants?

Have we really become so detached from nature?

I believe we have.

A FEW REASONS WHY WE TEND TO BEHAVE BADLY:

Am I being too harsh? No. I don’t believe I am. I have been talking about this stuff “going green” for so long now and while I am happy that there is so much good stuff online about what it means to go green, there is also a lot of noise! A lot!

Honestly, our planet is dying. We are pushing species (over 30,000) to the brink of extinction every year.

We are using more plastic than ever before. We have NO ties to it. We think if we are recycling we are making a good green choice. We are not.

In most cases, 89% of the plastic we recycle ends up….wait for it….in the garbage….filling our landfills.

But we don’t SEE the effects of our waste and over-consumption!

We consume, toss into the recycling bin and voila it’s gone. The city picks it up, we pay and it disappears.

IT DOES NOT DISAPPEAR!

The fish are sick.

The coral is dying.

We kill 100 million sharks a year.

The water is rising in many parts of the world.

There are climate refugees all over the world.

But we still continue to consume.

How is all of this connected to selfie-culture?

Well, the more selfie-must-have -locations on our bucket lists, the more waste we are creating, spreading it around like a plague.

We really need to have a plan in place as to what conscious tourism actually means. We need to define it and put laws in place to uphold it. It’s the only way I see real change happening. Banning straws is NOT ENOUGH!

It has to happen at the local level in small towns, then onto big cities and so on.

I read an article recently in FASHION magazine’s sustainability issue. It’s a quote written by super-stylist Sarah Jay, she says this about the impact of the fashion industry on the planet and its resources:

“The truth is we’ve been and consuming clothing at an alarming rate, maniacally making thneeds while staring into the sixth mass extinction. We are decimating our precious water supply, contaminating our soil and committing a protracted sort of genocide with feigned ignorance, employing vulnerable people in developing nations to do fashions dirtiest and most dangerous work. “

This is a really powerful quote and lends itself to any eco issue we face today.

The point is, every choice I, you, we make has an effect on the world around us.

There is an impact, and sometimes that impact is terrible.

Put your ego aside and use your head!

What are your thoughts on this growing issue in our society?